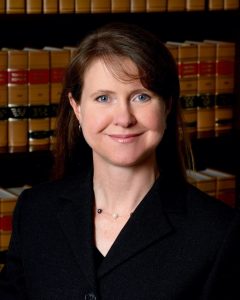 Julia W. Crisfield, Esq. is an attorney at LEPLC and focuses on estate planning and probate, as well as trust planning and administration.

Julia retired from the U.S. Navy after 21 years of service as an engineer and lawyer.  In the Civil Engineer Corps, she served in the Seabees, as a public works planning officer, and as a military training instructor before attending law school.  Upon transferring to the Judge Advocate General’s (JAG) Corps, she served as a prosecutor in Washington, DC.  She also practiced personnel law in the area before being transferred to Naples, Italy, where she first served as counsel to the base commander.  She subsequently worked in the areas of claims and foreign criminal jurisdiction, and she again served as a prosecutor before returning to the U.S.  As the Senior Defense Counsel in Washington, DC, she represented servicemembers facing courts-martial and provided legal advice to senior officers on a variety of issues.  Mrs. Crisfield next served as the Academic Director at the Naval Justice School in Newport, RI before retiring from the Navy in 2015.